It’s hard to believe that I started life answering to the name of Max.  I’ve only recently felt ready to talk openly about the trauma of my kittenhood which was marred by anxiety and uncertainty.

After leaving Mother as a kitten I was taken in by a family who loved and cared for me but there was a problem.  Or it would be more truthful to say that I was the problem.  I had only been with the family for a month when their boy became ill.  He didn’t even have to touch me.  Just being in the same room with me made his eyes water and he’d start itching and once he even broke out in a nasty rash.  I felt terrible!  I took great care to clean myself thoroughly like Mother had taught me, but it was no good and the family eventually had to put ‘Max’ up for adoption.  I was told I was going to be taken in by a middle-aged woman living on her own in the local community whose cat had recently died.  This didn’t sound good at all.  What did the cat die of, I wondered?  Boredom probably.

The first few weeks with my new owner went really well.  My name was changed to Weasley and a neighbouring ginger cat, rather unimaginatively named Gingah, took me under his wing and became a sort of mentor to me.  My predecessor, Wanda had been a small but feisty grey tabby who had lived to the ripe old age of sixteen and had even travelled overseas with the family.   I sensed that Gingah and Wanda may have had some ‘history’ so I didn’t press him for information, but he did mention (with a peculiar glint in his eye) that Wanda once went missing for nine days!  My new owner had given up hope of finding her and had even disposed of her bowl.  Imagine that!  Horrified, I made a mental note to stay close to home and to my owner at all times.  Gingah went on to say that there were many advantages in having a single middle-aged woman as an owner and related tales of such indulgence and affection that I’m sure he’d exaggerated to make me feel less anxious.

When I was very small Mother had told me that the first six days of a new assignment were crucial – a sort of trial period.  Since my last placement had ended badly, I was keen to make a good impression and followed Mother’s strict instructions about toileting and personal hygiene, remembering always to lick my paws to get right behind my ears and adopt a perfect “cello” pose which is generally accepted amongst cats as the optimal position to clean one’s nether regions. 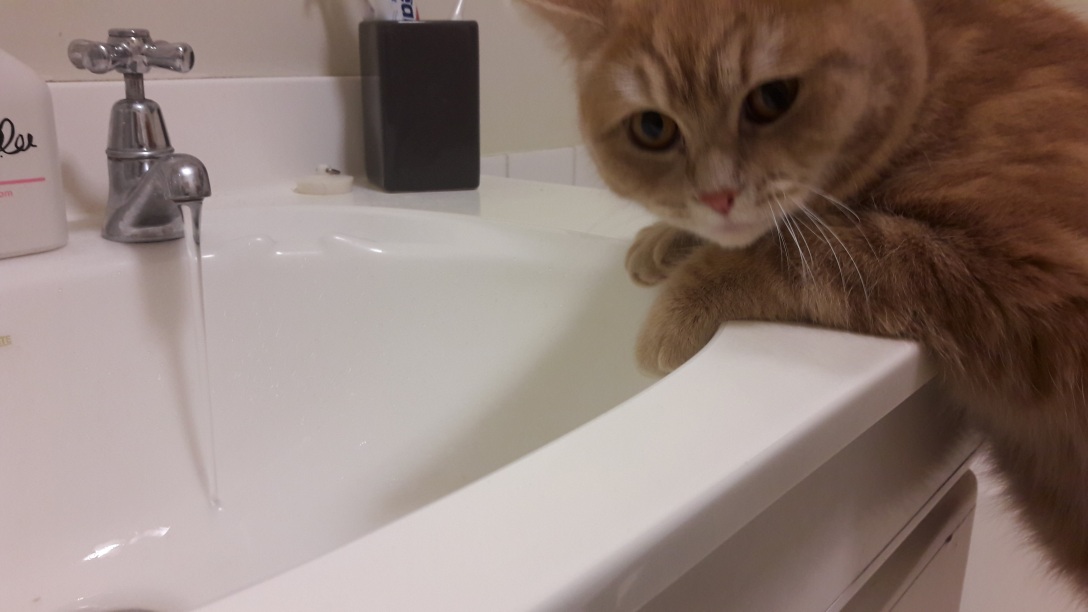 I had just passed the six-day trial period and was starting to relax into my new surroundings when I did something so terrible that it haunts me even to this day.  I was in the kitchen waiting for my breakfast when Mummy, who was rushing to get ready to go to work, tripped over me.  I take full responsibility for the whole fiasco.  I wasn’t hurt at all, but she had to be taken to hospital in an ambulance!

I was absolutely beside myself.  Her daughter came over and looked after me but by this time my anxiety levels had gone through the roof and I started to have a few ‘accidents’ on the carpet.  Mummy was in hospital for ages and it turned out she had something called multiple sclerosis.  Do cats get that?  Had I given it to her?  Was the poor boy at my previous home now in hospital too, all because of ‘Max’?  I felt so ashamed.  What would Mother say if she found out that I was not just a complete failure as a pet, but a serious health risk?

Gingah told me not to worry – that my owner had been walking funny for ages and he didn’t think It had anything to do with me tripping her up like that.  He also said that lots of people sneeze a lot when they’re around cats so I might not have been responsible what happened to the boy at the previous house.  I’m certain he was just being kind and a few months later he broke the news that he’d heard I would be moving away.  Initially I thought mournfully that I was being dispatched in disgrace to wreak havoc on another poor unsuspecting family.  For a while I considered running away to eke out an existence with the homeless cats.  A disparate bunch who had banded together to form the feral feline underbelly, living on their wits and vermin.  No soft beds or fresh bowls of Jimbos for those hardened outcasts.

And then I realised to my immense relief that it wasn’t just me who was moving – we all were!  Apparently the house we were in had too many hills and slopes and hazards for Mummy now that she had MS so we were moving to a lovely sunny place in a different part of the village.  I was gutted about leaving Gingah and it was too far for me to walk to visit him.  Certainly not worth the risk of getting lost and arriving home nine days later thin and weak with no bowl.  I was just going to have to strike out make new friends.

I soon got chatting with another ginger cat who didn’t seem to have a name.  He was quite skinny and when he told me he was homeless I felt so sorry for him that I suggested he sneak into my house and have a bite to eat from my bowl.  Mummy nearly caught him, but he quickly ran off and I think she just saw an orange blur disappearing out the corner of her eye and thought it was me.  After we’d got away with our deception the first time, I’d always make sure to leave a bit in my bowl for ‘Ron’.

Ron and I found a great place to hang out in the evenings that was only a few doors down from my house.  It’s called a ‘man cave’ and it’s an outside shed thing with a bar and comfy chairs and sometimes we’re able to sneak a few tasty nibbles.  Many people have said that I resemble Puss in Boots and Ron always roars with laughter at my impersonations when we’re at the man cave.

We pulled an all-nighter at the man cave recently and Ron and I got talking about girls.  He was boasting about all the girlfriends he’s had which is hardly surprising since he probably hangs out with that dodgy homeless crowd.  I told him I’ve been neutered so I don’t have to go through the awkward embarrassment and anxiety that I’ve heard is part and parcel of the dating scene.  Ron just laughed and told me about Squeak who had jumped through a plate glass window to get to a cat on heat and had to have five stitches!  I asked why he didn’t just use the cat door and Ron said with a rather malicious sneer that he had grown too fat to fit through his cat door.

It was at this point that I began to wonder about Ron.  I’d seen Squeak fairly recently and he’d certainly put on a few extra pounds which he’d shrugged off as being down to his ‘winter coat’.  I hadn’t liked to say anything, but I privately thought that by February a winter coat should probably have been shed.   Even so I didn’t believe Ron’s story about the window because I’d never seen Squeak wearing an Elizabethan collar, nor had he ever shown any signs of having had stitches.  Plus, I had it on good authority that Squeak had been neutered some time ago.

It was getting on for midnight by this time and Ron was about to launch into another story he’d heard about Whittaker, a Burmese socialite whose adventures were legendary in the village, when a voice in the neighbourhood started calling “Benedict, here puss, puss, puss.  C’mon Benny, din dins!”.  Ron’s ears pricked up and he leapt out the door with such a force that it slammed closed behind him.  I was stuck in the man cave by myself!  What if the people had gone away?  I could be stuck in here for nine days!

I spent a sleepless night thinking about Ron or Benny or whatever his name is.  He never even returned to see if I was alright!  “Benedict” was obviously an untrustworthy character who fat-shamed other cats, invented non-existent sex scandals and had lied through his teeth about being homeless!   What on earth had I said in a careless moment that might now be repeated around Diamond Harbour?

I was so relieved when morning came and I was discovered in the man cave.  I ran home at full speed, drained my water bowl and gobbled down my food without leaving any left-overs for ‘Ron’.  I felt absolutely dreadful and slept virtually the whole day.  I’ll never do that again!  Mummy was furious.  She had obviously missed me terribly and I had to wait at least ten minutes before I got my usual cuddle and reassuring words of love and affection.

I felt so betrayed and it was a long time before I could bring myself to speak to Ron after that.

11 thoughts on “The Woes of Weasley”

This site uses Akismet to reduce spam. Learn how your comment data is processed.